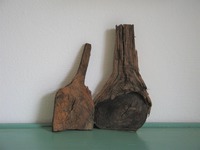 A large part of my life revolves around art, creativity and creation. As a kid I was always drawing and tinkering, as an art-student and artist I was (and still am) painting and sculpting, as a hobbyist drummer I played in bands and co-wrote songs, as a healthcare psychologist I work in a creative way and as a drumbuilder I make drums that are more and more recognized as pieces of art. Over the course of many years of creating I've done a fair bit of reflecting on the creative process and on how that is related to artistic quality. The concepts time and coincidence were part of these reflections from the beginning. This week something happened that somehow gives me the opportunity to express my thoughts about these concepts and also illustrates these thoughts.

Recognition. A few months ago my mother in law gave me a piece of wood, the piece you see in the picture on the right side. Because of moving to a smaller house she was cleaning out and she found a box of things she found in nature and that she liked as objects to look at. She asked me if I was interested. Yes, I was. Especially this piece of wood interested me. To me it had a certain artistic quality as an object. There were contrasts on the level of texture (rough and less rough), shape (a vertical column and an oval in a horizontal plane), color (light and darker wood) and existence (inanimate piece of wood and something animalistic that moves). Also the thing brought funny associations. First, it kind of resembled a spoon which starts a thought like this: "Spoons can be made of wood. This is wood, but this is not made. In fact the part of a piece of wood that makes making difficult, the knot, is a crucial part of this not-made spoon". Second, it kind of resembles a round kiln or oven out of which flames escape which is funny or weird because wood is generally the stuff that is burned, it is not the oven, nor the flame.

So, without saying it is a piece of art, I recognized some artistic quality in it. My mother in law also recognized that, which is why she kept the piece for a long time. Other people recognized it too; I put it up a cupboard in our house and it drew the attention of some people visiting us. It was considered beautiful, funny and interesting.

Allmost all creative processes I been thought started with recognizing quality, or maybe I'd better say potential, in something. In the times I painted still lifes for example I was once struck by what I saw on my writing desk when I was drinking ginger tea with honey; the honeypot stood next to an inkpot and there was a beam of sunlight that lit up the halfway crystallized honey which made it contrast beautifully with the black of the ink. This visual phenomenon combined with the more or less symbolical meanings of honey and ink was a strong impetus to make a still-life. Recognition is a first essential.

Time and letting go. I've looked at the piece of wood a lot and sometimes wondered if I should do something with it. Nothing came to mind. The thing didn't need anything done to it. It was ok as it was and I was happy with it. Over the years I grew to love objects like these. They have many qualities a man made piece of art has, but are also perfectly natural in their being. In art, including my own, I many times miss this naturalness, a kind of quality that gives me the feeling that the object was not conceived or made, but somehow came into being and has always been there. I considered the piece of wood an object like that, put it on the cupboard and then forgot about it.

In many creative processes I started working on something and at some point I had to conclude that I was stuck, or, less dramatically, I had a strong feeling that any further action would be senseless. In my twenties, when I was very ambitious to create art, and when quite a large part of this ambition was an "ego-thing", I strangled and killed many potentially meaningful artworks because I didn't know how to stop at that point. Driven by my ambition I just kept acting. Gradually I learned to let go of pieces when I felt there wasn't anything I could do. Psychologically this was much more difficult than to keep going, it implied bearing insecurity ("Will it ever become a good painting?") and it implied the need for patience (which has always been my biggest struggle). But, luckily, over the years I also found a simple but very effective trick; forget about it.

That's where the concept of time comes in. There's a choice to let go, and then there is a certain amount of time in which the conscious mind is forgetting about the thing. In this time there's of course sub-conscious processing going on, which may later lead to inventions or breakthroughs in the project at hand, but I am more and more thinking that the true blessing of time is on another level: coincidence.

Coincidence. This week, cycling home from work, I hopped on the curb that leads to our house and I found the piece of wood on the left. It pierced my eyes, pierced my conscious mind and hit my unconscious mind that started yelling with joy: "Hey man! That's his little brother!" Oh, the coincidence! A piece of wood that also vaguely resembles a spoon, which also has a knot on that crucial place, what are the odds? Of course I picked the thing up and took it home. I put it next to the right piece and was very pleased; I discovered even more layers to the coincidence I was experiencing. On a visual level the combination of the two pieces of wood was so much more interesting than only the first piece, there was color added (deep brown), there was a vague square added to complement the oval. The cracks in both the knots were in more or less the same direction, whereas the vertical columns were in slightly opposed directions, creating an interesting tension. With all these visual elements, in (coincidentally) all the right places, looking at the two things together was an exciting and dynamic thing. On a conceptual level there were more associations than before: The pieces were now vaguely evoking an archetypical couple and were saying something about how the concepts manhood and womanhood relate to the concept human; we're made from the same stuff but in a slightly different way. Which association brought another to mind: a Dutch expression (translated) "Being cut from the same wood", which is extra funny because the pieces of wood weren't cut (they were probably torn) and are not the same wood.

This assembly that came into being, this sort of "readymade" with all these particular qualities, could have in no possible way be created by me. In the sense that I could not have conceived this and then execute it. Time was crucial and the coincidence that was possible to happen in that time. The only thing not coincidental in how it came into existence is my recognition of quality or potential.

Quality of art. For a variety of reasons (that I will not go in to) it is difficult for me to say what art is and what it is not, but I do know that, for me personally, a piece of art should somehow express or show something that cannot be shown by conscious will. Also a piece of art should touch you in places you haven't quite been touched yet, or where you haven't been touched in quite that way. So, logically, in the coming into existence of an art piece there should somehow be a partial absence of conscious striving, to make place for that what lies beyond our grasp. For me this is about choosing to let go and to forget, and about time/space for coincidence to occur. I am deeply thankful for the lessons I learned from art, both making an enjoying it. It is truly humbling to be confronted again and again with a simple truth describing the biggest part of the human condition: there's only so much we can do.